This week the Blog focuses on the work of the Border Collie Trust. Situated in the heart of Staffordshire, the Trust undertakes throughout the UK in the care, rescue and rehoming of Border Collies & Collie crosses.

As with many organisations we would not be here today if it were not for the efforts of a particular individual, in our case a dog lover by the name of Hazel Monk.  This lady had a real passion for dogs and Border Collies in particular.  Hazel was involved with a rescue organisation (now known as the “Animal Welfare Trust”) and worked with Ray Dedicoat in general rescue and welfare.  Back in the 70’s Hazel began to concentrate her efforts on Border Collies.  In 1976 – the year when Border Collies were recognised by the Kennel Club, there was an increase in popularity and a new interest in collies. Hazels work and foresight had been vindicated. The inevitable followed!

Unscrupulous breeders & dealers looked to the collie for new profits.  They generated many unwanted dogs and some distressed owners.  Collie puppies were for sale with little or no information regarding their characteristics.  As people realised their little bundle of black and white fluff was in fact an intelligent and highly motivated working dog, it was not long before unwanted puppies appeared in ever increasing numbers.

Hazel helped many dogs during the next 15 years and the success we enjoy today is in no small part due to Hazel’s dedication and ability to focus the enthusiasm of the volunteers – sadly she died in October 1992.  As her health began to deteriorate the work was handed over to Jennie Booth who was National Co-ordinator until she retired in 2004.

It became clear that there was a need to keep in contact with the network of helpers and fund- raisers, which were continuing to be developed, so late in 1992 the first Newsletter was published.  This also helped to rally further support and keep those involved with the Rescue informed.  This gradually progressed to the development of the Border Collie World magazine, which is still issued quarterly.

In 1994 we made our first visit to Crufts which was a major success.  From this one event we were able to raise funds, public awareness and find new support on a larger scale than ever before.  By the time Crufts ’95 came round it was clear that if Border Collie Rescue was to continue offering a comprehensive service, meeting the demands of the dogs and owners, we had to look again at the organisation as a whole.  A steering committee was formed, to ensure Rescue continued to function coherently and efficiently and investigate the possibility of applying for charitable status.  In 1996 Border Collie Trust became a registered charity.  It was vital to be fully accountable – although we had always kept financial records.  As a charity there was more scope to raise funds.  We were the first registered charity dealing exclusively with Border Collies and working sheepdogs.

In 1997 the Trust launched a kennel appeal hoping that with lots of fund raising a permanent kennels would be possible.  The Trust was very blessed to receive a large donation.  This enabled Trustees to purchase a 4 ½ acre site, which was a boarding kennel.  The kennels were old and dilapidated and funds were sought to replace these with a new block designed for Border Collies.

Since then, much has changed.  Further large donations have seen the opening of a kennel block of 40 kennels and a separate block of 14 kennels for boarding. 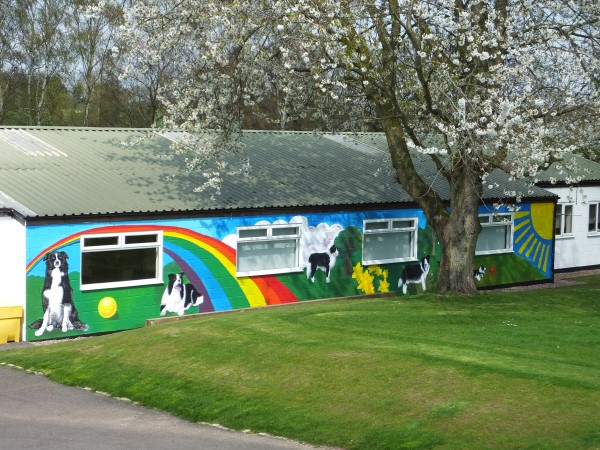 The Trust tries to place each dog in a suitable permanent home.  There are no time limits and some dogs stay here for many months.  Often a farm dog is very shy and needs much staff input to socialise it before the dog is suitable to be homed.  We have excellent working relationships with other rescues throughout the UK and Eire including branches of the RSPCA and Dogs Trust.

The Trust also operates a “Sponsor a Dog” scheme which enables us to take a few older dogs and give them a home for life – generally few people want to take on an elderly collie.

Most of our collies come from stray dog kennels and rescues around the country, mostly in Wales but also Eire. All dogs are wormed, vaccinated, microchipped and leave us with our promise to take our dogs back at any time.

Our centre is open everyday, to receive dogs for re-homing (by arrangement), dogs for boarding (booked), visitors who want to give our dogs a home and people who would like to offer their services and skills to further our work.

Although much has been achieved the work continues………………………..

For further information on the Border Collie Trust please visit their website:- http://www.bordercollietrustgb.org.uk